Go Small or Go Home: How to Adjust Plans So You Actually Keep Them 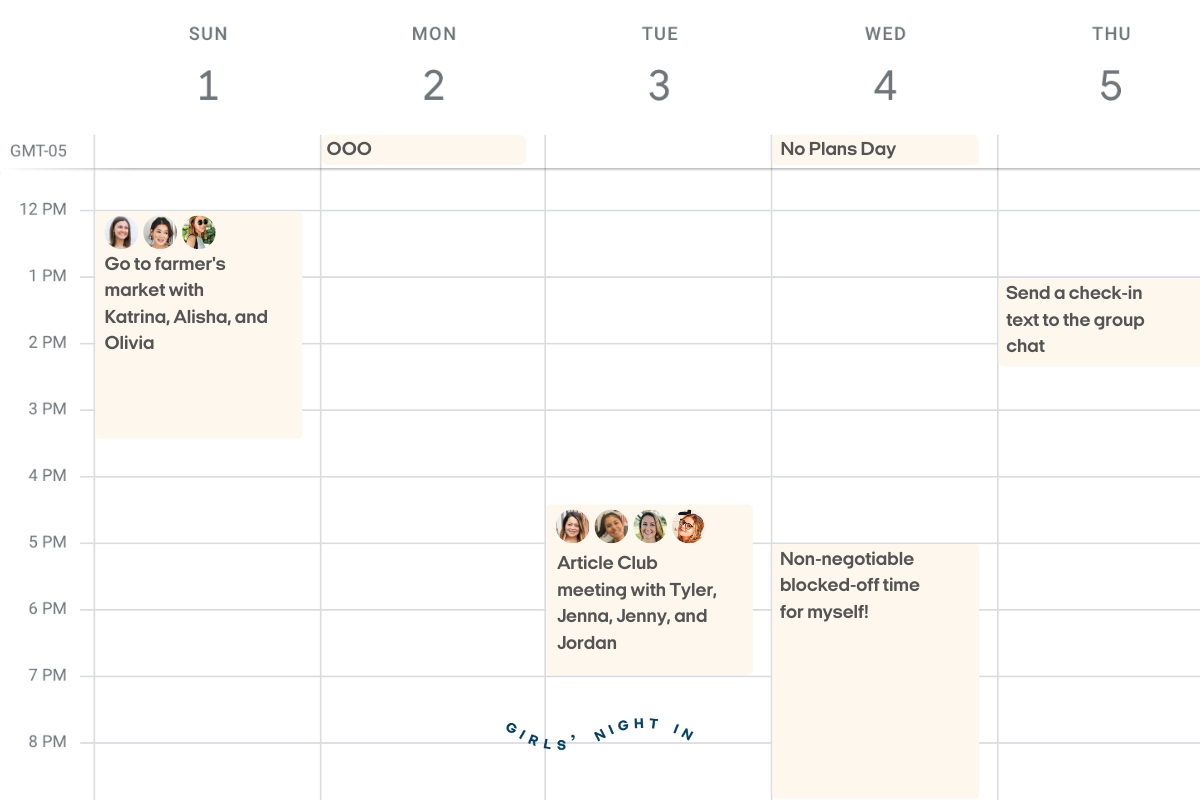 I couldn’t be more excited about the fact that fall is officially here! Even though summer tends to be viewed as a highly social season, I actually think it’s a fairly difficult time to see friends. Every week, it seems like a different person is going to some lake or heading to a wedding, making it basically impossible to get everyone in the same place. When Labor Day rolls around, I feel relieved — like, finally, let the group hangouts begin!

But the excitement you feel when making a bunch of plans can start to give way to dread as the actual events get closer. Things happen: the days get shorter, work gets busy, people catch colds, holidays sneak up on us, and the calendar fills up quickly. Before you know it, you may find yourself dealing with a bunch of cancellations…or you might be the one who is tempted to cancel. But there are plenty of small things you can do when making plans to make it more likely that you actually follow through. Read on for some tips.

1. Before you make plans with your friend group, do a temperature check.

How’s everyone feeling these days? What’s keeping them busy, or stressing them out? Before you suggest three-day weekend trip where you’ll go leaf peeping, make candy apples, and go hiking, get a sense of what your pals’ bandwidth is like. Maybe a weekend getaway is exactly what y’all want and need…but maybe something closer to home (on a lower budget) is what would allow you to connect and recharge in a meaningful way, without any added stress.

2. Get something on the calendar early, but not too early.

I love planning things well in advance (and when you’re trying to coordinate a bunch of busy schedules, that’s a necessity). But stuff comes up, and the fall book club idea that everyone loved in early October can feel exhausting come November when the work projects and family holiday obligations are starting to pile up.

If you want to go this route but know that waiting too long to schedule won’t work, ask everyone in your friend group to agree on a specific day for a hangout, but then wait until, say, two weeks before to decide what the actual plan will be.

3. Give yourself one non-negotiable no-plans day each week.

I find that I’m most tempted to cancel plans when I’m really overstretched and don’t have any time for myself. One thing that’s helpful is blocking out one day each week (so, Sunday) where I simply won’t make any plans. Knowing that you always have one weekend day that’s yours and yours alone makes canceling far less tempting.

4. When it comes to Friday nights, proceed with caution.

On on hand, Friday nights are a great night to hang out — you’ve had a full week but you have enough momentum to want to socialize, and then you can hunker down all weekend. The downside is that if you’ve had a really busy week, the idea of going out will sound terrible; you’ll be too tired to enjoy it (which you’ll then feel guilty about). Consider not making Friday night plans any earlier than Friday before (because that’s when you’ll start to have an accurate sense of your workload for the following week). If you do venture into plans, try to choose a fairly low-key activity (e.g., drinks near the office versus dinner at a trendy restaurant), and aim for a start time on the earlier side (so, 6:30 p.m. instead of 9 p.m.) so you don’t have time to go home, flop on the couch, and send that “You’re going to hate me, but…” text.

5. Figure out the MVP of your hangout.

In the tech world, MVP stands for minimum viable product; it means the version of an app or website that has only the features necessary to satisfy early customers or users. Instead of starting with the most elaborate, aspirational “Wouldn’t it be amazing if?” plan, you think about the bare minimum, and then build up from there.

You can apply the same principle to friend hangouts. In this context, the MVP might be yummy food (and/or drinks) and plenty of time to talk and catch up. Or it could be any activity that makes it possible to include a lot of people, or to invite pets and babies. Or maybe it’s a get-together that has a light theme/activity, because that’s what your friend group thrives on. Once you figure out what the core purpose of the hangout is, it’s easier to plan something really fun…but also really manageable. And knowing that it will be fun and meaningful but not too fussy is what’ll get everyone excited enough to actually want to show up the day of.

Also! If you’re already feeling the pressure to plan a bunch of elaborate autumn activities, consider scaling back your ideas to something more manageable.

Here are some easy swaps to make:

Instead of carving pumpkins (which is never as fun as it sounds!), buy every single pumpkin item that Trader Joe’s sells and do a massive taste test.
And if you really want to do pumpkin art, consider painting/decorating instead of carving.

Instead of book club, do an article club.
With an article club, you get all of the intellectual stimulation of a book club, without having to spend three weeks reading a book someone else chose for you. You could look for articles on the longer side, and/or choose a few shorter articles centered around a theme. (Might we suggest the Reads curated in the GNI newsletter each week?)

Instead of going to a restaurant where you have to get ~dressed~, go to someone’s house and wear cozies.
But if the getting dressed up part is what you enjoy, you could still do that at someone’s home — it’s just nice to not have to deal with making a reservation.

Instead of driving upstate to an apple orchard, get a bunch of donuts and apple cider from the farmers market and enjoy them on someone’s patio or in a park.
TBH, you don’t even have to go to the farmers market; a box of Munchkins will work just fine.

Instead of planning elaborate Halloween costumes and stressing about the best party to attend, organize a day-long scary movie marathon.
I love Halloween, but there’s so much pressure to come up with a super clever costume and have The Best Time. It’s perfectly OK to opt out of that!

Instead of planning a Friendsgiving with a turkey and all the classic Thanksgiving sides, do a fall potluck where people bring whatever is easiest for them to cook (or buy).
Cooking a turkey is stressful! (And turkeys aren’t cheap!) Why not make a big baked ziti (or whatever), and use your extra time and energy to research fun party games/activities? That’s what people will remember anyway.

What are some ways you think small and adjust your plans to make sure you actually keep them? 📆

Photo by Ben Duchac on Unsplash.

How Do I Deal? 5 Tips for Building Routines to Proactively Help Your Mental Health

How Do I Deal? 6 Women We Admire Share How They’re Getting Through It Right Now

How Do I Deal? Some Rabbit Holes to Fall into If You Find Yourself in Need of a Distraction